For eleven years, from 1985 to 1995, the city of Adelaide in South Australia was host to the Australian Formula One Grand Prix. Held in early November, it was, for the most part, the last race of the season and the teams and drivers enjoyed its “end of school year” atmosphere and many would holiday in Australia before returning to Europe. The race was a popular one with the Formula One “circus” and three times won the Formula One Promoters’ Trophy as the best run Grand Prix of the season.

The momentum started to gather for Australia to host a Grand Prix when Australian Alan Jones won the 1980 Formula One driver’s championship. The races were being televised, and the ratings were good. Rumours started emanating from the eastern states of Australia of a willingness to hold a Grand Prix event. But it was the South Australian Labor Premier, John Bannon that took the trouble to fly to London and meet with Formula One boss Bernie Ecclestone and secure the race for Adelaide.

The State Bank collapse in 1991 and Bannon’s resignation in 1992, plus the political infighting over the cost of staging the Grand Prix, saw Ecclestone award the race to Victoria and it has been held at Melbourne’s Albert Park since 1996.

The loss of the Formula One Grand Prix left a large vacuum in the major events calendar for Adelaide causing the State Government to support a number of other events in an effort to fill the void. One such event was the Classic Adelaide Rally, a competitive meeting on closed country bitumen roads that showcased different regions around Adelaide and attracted competitors from Australia and overseas and also some extremely rare and exotic machinery. It also catered for non-competitive entries that could take part in the touring category to enjoy a uniquely South Australian experience.

The first event took place in 1997 and ran until 2009 although it was revived briefly as part of the Targa Australia series. The rally though is about to be resurrected once more as an essential part of the Adelaide Motorsport Festival. The festival was first staged in 2014 at the home of Adelaide’s Formula One racetrack Victoria Park. The event was a great success showcasing Australia’s motor racing heritage including some significant Formula One cars.

The Sporting Car Club of South Australia, with the help of the State Government, is responsible for putting this exciting event together and this year the Adelaide Motorsport Festival and Classic Adelaide Rally will be held over four days from Thursday, October 15th to Sunday, October 18th, 2015.

In 1997 I covered the inaugural Classic Adelaide Rally for English publication Classic and Sports Car, and its revival has prompted me to delve into the archives and publish my article and photos for MotoVue below.

The Ferrari 246GT of Angliss and Mcmahon tackle the Paris Creek hairpin.

Bruce Hogarth and co-driver Bruce Walter have won the inaugural Classic Adelaide Rally held over the 6th to 9th of November in South Australia.

The FIA sanctioned event attracted nearly 100 entries and covered some 1000km of bitumen road with 300km of closed special stages over four days. Competitors left race headquarters at Adelaide’s Hilton Hotel each morning before completing a loop of some of South Australia’s most demanding hills roads. This included visits to the sites of former road circuits that have held an Australian Grand Prix such as Victor Harbor (1937), Lobethal (1939) and Nuriootpa (1950) before returning to Adelaide’s Victoria Park Racecourse to complete a Super Special Stage on the remains of the Formula One Grand Prix circuit.

It was Hogarth though who drove his hairy-chested 1969 351 cubic inch V8 XW Ford Falcon GT HO to victory on the last day of the event to beat overnight leaders and Panama to Alaska winners Rick Bates and Jenny Brittan who crashed their 1971 Porsche 911 out of contention on the final Paris Creek stage. Hogarth and Walter, however, had been strong contenders for outright honours during the four days of the event consistently running in the top three. Chris Stephen and Adrian Mortimer claimed second place outright 27 seconds behind the leaders in their 1964 Iso Rivolta with Tom Barr-Smith and Mark Barr-Smith third 1 min and 05 seconds adrift in their 1964 BJ8 Austin Healey Rally. 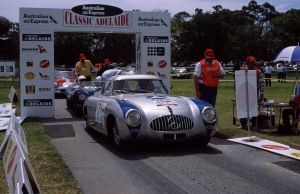 But the event was marred by a number of accidents one of which claimed the life of former F1 Grand Prix Board Chairman Ian Cocks who was 5.7km into the 22nd stage and holding third place overall when he failed to take a corner on the Mt. Bold road. Mr Cocks’ 1967 Porsche 911S hit a tree and rolled over before catching fire. His 19-year-old daughter and co-driver Chantel Cocks were pulled from the wreck by spectators and taken to hospital suffering from severe burns. It was her first competition event.

Mr Cocks was an experienced rally driver and had recently completed the Panama to Alaska Rally. He was also an advisor to the directors of the Adelaide Classic Rally, an event that many had hoped would fill the void left by the loss of the Adelaide Formula One Grand Prix which was also held in early November.

Sherman and Walkley attack the Paris Creek hairpin in their 1964 Aston  Martin DB4.

Although the event had secured naming rights sponsorship from Ansett Air Freight and had captured television coverage by German Sports TV Network DSF, most of the support for the rally has come from the State Government through the Major Events Corporation via the South Australian Tourism Commission. The Premier Mr Olsen would not comment whether the Government would continue to support the event until a full investigation had been completed into the accident.

Chairman of the organising body, Rally and Motorsport S.A. and well-known rally driver, Dean Rainsford, described the tragedy as “our worst nightmare.” However three international teams of Tony Brooks and Baron Otto Reedz-Thott driving the 1957 Le Mans-winning D-type Jaguar, Ditter Ritter and and Micheal Ruess competing in the 1952 Pan Americana winning Mercedes 300SL Proto and Paul Vestey and Doug Nye in the Le Mans class winning 1966 Ferrari 365GTB, had nothing but praise for the event, comparing the organisation as the best they had encountered anywhere.

Vestey, who has competed in similar events in Europe and America commented, “ This is the first time we have encountered the use of Grand Prix type Medical Intervention Vehicles anywhere for this type of event.” Well-known motoring historian Doug Nye summed up their feelings by describing the Adelaide Classic Rally as, “Mind-blowingly fantastic.”

Here is a link to the 2015 Classic Adelaide Rally: http://www.classicadelaide.com.au