In this modern world of instant access to 24-hour news services and an almost inescapable saturation of the latest events from around the globe, it’s not unusual for those in the public eye to quickly achieve the status of celebrity or even “Superstar”. But to accomplish this level of fame during the 1950’s, in what could only be described at that time as a minority sport, is truly extraordinary.

Born in St. Helens, Lancashire on the 29th of March 1923, Geoff Duke OBE became a household name during this period in Britain, Europe and the Commonwealth. A four times World Champion in the 500cc (MotoGP) class and twice in the 350cc category of Grand Prix motorcycle racing, Duke also became the first rider to win three consecutive 500cc (MotoGP) World Championships between1953 and1955. Geoff would have been in contention for a fourth title had the FIM not imposed a six-month ban for supporting a privateers strike for more start money at the 1955 Dutch TT. Duke also became the first rider to win two World Championships in the same year, taking the 350cc and 500cc titles in 1951. 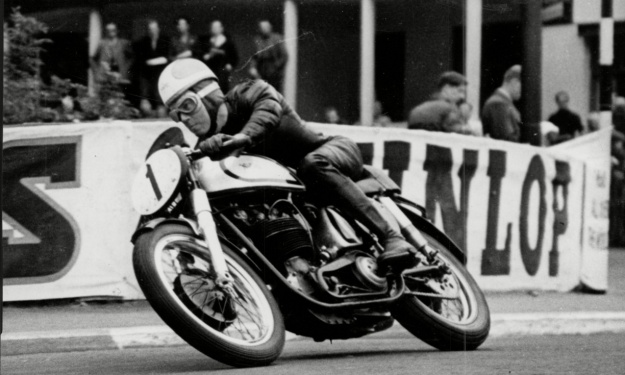 Duke on the Norton single.

Duke’s background in motorcycling had started at the age of 10, when unbeknown to his parents he bought a belt drive Raleigh of the same vintage. While still a teenager at the start of the Second World War, Duke trained dispatch riders in the Royal Signals Corps. He subsequently competed for the first time in military trials events and also achieved the status of Team Sergeant in the Royal Signals Motorcycle Team, the famous “White Helmets”.

An exceptional trials rider, Duke was employed in Norton’s trials department after the war. However, he already had his sights set on something faster. With Norton’s backing, he made his road-racing debut in 1948, starting out on the most dangerous racetrack of them all, the Isle of Man TT course. 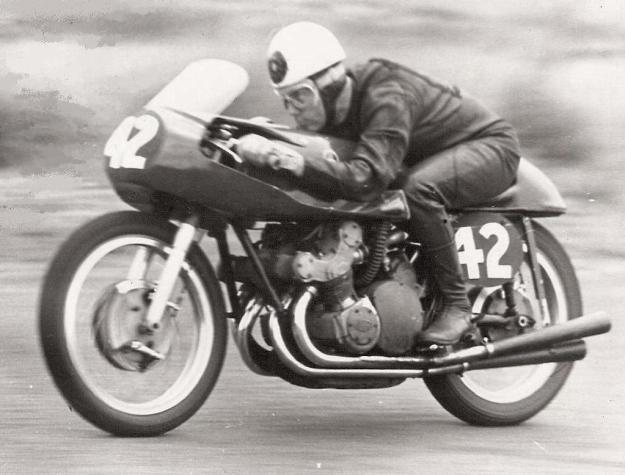 Duke on the technically advanced Gilera.

His initial World Championship titles in 1951 had come on Norton singles but a reluctance by Norton management to pay Duke what he was worth led him to change to the technically advanced, but unruly, Italian four-cylinder Gilera. Duke helped develop the advanced machines to take a hat-trick of 500cc titles. He also became the first rider to win 500cc world titles on two different brands of motorcycles, a feat that has only been emulated by a handful of riders. Geoff also set new standards off the motorcycle, with a polite manner, good looks and smart clothes.

Another first for Duke was the use of a close-fitting one-piece leather racing suit, which no doubt came about by trying to reduce wind resistance on the underpowered Norton singles. Duke also dabbled in car racing and became an Aston Martin “works driver” during in 1952 and 1953.

Another win for Duke.

After 33 Grand Prix wins from 89 starts and 50 podiums, which included 6 wins at the Isle of Man TT, Duke retired from GP motorcycle racing, ending an illustrious 10-year road racing career. A short-lived and unsuccessful return to car racing resulted in a major crash in Sweden after which Geoff became a Hotelier in the Isle of Man, which by then was his home.

As well as receiving an Order of the British Empire in 1953, Duke was voted BBC Sportsman of the year and awarded the prestigious RAC Seagrave Trophy, both in 1951.