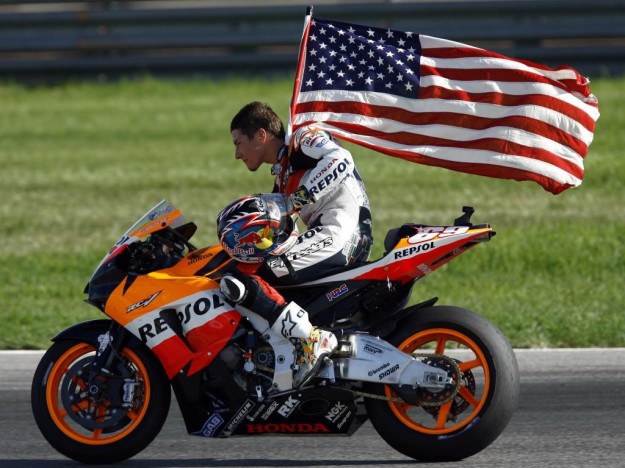 2006 MotoGP World Champion Nicky Hayden has passed away following an incident with a car while out training on his bicycle along the Riviera di Rimini on the Adriatic coast. He had competed at the nearby Imola circuit the previous weekend in the World Superbike Championship. On Wednesday the 17th of May he sustained severe head and chest injuries when he was hit by the car.  Hayden was treated at the Maurizio Bufalini Hospital in Cesena. “The medical team has verified the death of the patient Nicholas Patrick Hayden, who has been undergoing care in the intensive care unit following a very serious polytrauma, ” the hospital said in a statement.

The 35-year-old from Owensboro Kentucky started out racing dirt track in his native USA before switching to the tarmac and was crowned AMA Supersport Champion in 1999.  This was followed by the AMA Superbike crown in 2002 making Hayden the youngest rider to win the title before moving to the MotoGP World Championship for 2003. As a rookie, he took two podiums that year, at Motegi in Japan and Phillip Island in Australia.  More podiums followed in 2004 before Hayden took his first pole and Grand Prix victory at Laguna Seca in 2005. The following year, the “Kentucky Kid” became the MotoGP World Champion beating Valentino Rossi to the premier class crown, only securing the title at the last round of the year at Valencia in Spain.

Statement from Tommy Hayden, on behalf of the Hayden family:

“On behalf of the whole Hayden family and Nicky’s fiancée Jackie I would like to thank everyone for their messages of support – it has been a great comfort to us all knowing that Nicky has touched so many people’s lives in such a positive way.

“Although this is obviously a sad time, we would like everyone to remember Nicky at his happiest – riding a motorcycle. He dreamed as a kid of being a pro rider and not only achieved that but also managed to reach the pinnacle of his chosen sport in becoming World Champion. We are all so proud of that.

“Apart from these ‘public’ memories, we will also have many great and happy memories of Nicky at home in Kentucky, in the heart of the family. We will all miss him terribly.

“It is also important for us to thank all the hospital staff for their incredible support – they have been very kind. With the further support of the authorities in the coming days, we hope to have Nicky home soon.”