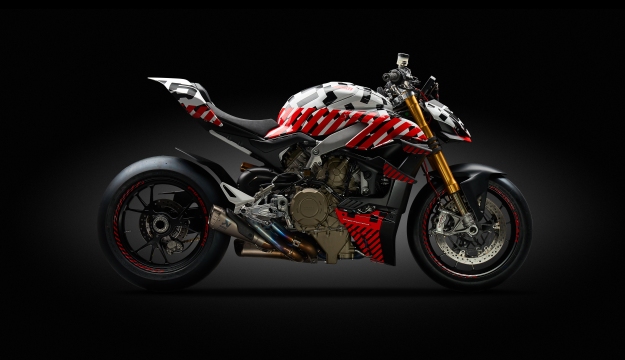 After an absence of four years in Ducati’s model line-up, the Streetfighter name is to be resurrected for a 2020 model based on the 1100cc Panigale V4.  A prototype model has been revealed and is set to compete at the Broadmoor Pikes Peak International Hill Climb on the 30thof June 2019 ridden by the four-time winner of the Heavyweight Class, Carlin Dunne.

Dunne rode a Ducati Multistrada 1260 to the win in last year’s event beating Australian Rennie Scaysbrook riding a KTM 1290 Super Duke by mere hundredths of a second as both went under the ten-minute mark for the 156-turn flight to the summit.

With the entry of the 1100cc Panigale V4 Streetfighter, an escalation of potent machinery looks likely to follow with Scaysbrook for one changing to Italian machinery by entering an Aprillia 1100 Tuono Factory in “The Race to the Clouds”.

And the Streetfighter is something very special. In keeping with Ducati tradition, the Streetfighter is derived directly from the MotoGP inspired Panigale V4 but stripped of its fairings, and fitted with high and wide handlebars. The front wheel lifting high-performance of the 1100 cm Desmosedici Stradale engine is kept in check by the use of MotoGP type aerodynamic winglets specifically designed for this model.

The prototype will race with a “pixelated” livery, designed by the Centro Stile Ducati and unlike normal practice with prototypes, the livery does not hide the lines of the motorcycle but reveals how the bike will look.

MotoGP type winglets are used to keep the front under control.

“The Streetfighter V4 will be one of the stars of the Ducati World Premiere 2020,” stated Claudio Domenicali, CEO of Ducati. “The Streetfighter V4 is the Panigale for road riding; so there was no better stage than the Broadmoor Pikes Peak International Hill Climb for what will be the highest performance Streetfighter ever put into production.”

The bike will be presented to the public at EICMA 2019 and will be available in Ducati dealerships starting from mid-March 2020 onwards.