Carlin Dunne, a four-time winner of the Broadmoor Pikes Peak International Hillclimb, has died during the 97th running of the “Race To The Clouds”. Dunne had set pole position for the event and was well on his way to setting a new overall record with the fastest time in the first three sectors of the 156-turn 20km course before fatally crashing within a short distance of the 4,300 metres above sea level finish line.

36-year-old Dunne, the 2018 winner in the Heavyweight Class on a Ducati Multistrada 1260, had been lured back to the event by Ducati North America to ride a prototype model 2020 Ducati Streetfighter V4 1100 in the Exhibition Powersports division.

Below is a joint statement issued by the Pikes Peak International Hillclimb Board and Ducati North America.

“The collective hearts of the Colorado Springs community and the Board of Directors of The Pikes   Peak International Hill Climb, along with Ducati North America, share the grief and pain of Carlin Dunne’s family, friends and fans over his untimely death.

Throughout the 97 years that this unique race has been conducted on America’s Mountain, we have experienced the ultimate joy in victory, the disappointment of failure and now, the unexpected heartbreak of the loss of a competitor, whose love of the race brought him to Pikes Peak. We mourn the tragic death of Carlin, and he will remain in our hearts forever as part of the Pikes Peak International Hill Climb family. Carlin will be remembered as a warm-hearted mentor with a competitive spirit. He was a gentle and thoughtful man who touched everyone who met him. We will always remember his contagious smile and genuine love for the sport.”

“There are no words to describe our shock and sadness. Carlin was part of our family and one of the most genuine and kind men we have ever known. His spirit for this event and love of motorcycling will be remembered forever as his passing leaves a hole in our hearts,” said Jason Chinnock, CEO Ducati North America.

With our deepest condolences,”

The Board of Directors of the Pikes Peak International Hill Climb

After an absence of four years in Ducati’s model line-up, the Streetfighter name is to be resurrected for a 2020 model based on the 1100cc Panigale V4.  A prototype model has been revealed and is set to compete at the Broadmoor Pikes Peak International Hill Climb on the 30thof June 2019 ridden by the four-time winner of the Heavyweight Class, Carlin Dunne.

Dunne rode a Ducati Multistrada 1260 to the win in last year’s event beating Australian Rennie Scaysbrook riding a KTM 1290 Super Duke by mere hundredths of a second as both went under the ten-minute mark for the 156-turn flight to the summit.

With the entry of the 1100cc Panigale V4 Streetfighter, an escalation of potent machinery looks likely to follow with Scaysbrook for one changing to Italian machinery by entering an Aprillia 1100 Tuono Factory in “The Race to the Clouds”. 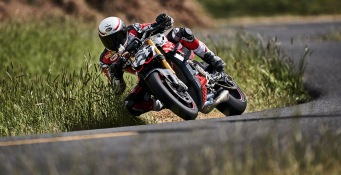 And the Streetfighter is something very special. In keeping with Ducati tradition, the Streetfighter is derived directly from the MotoGP inspired Panigale V4 but stripped of its fairings, and fitted with high and wide handlebars. The front wheel lifting high-performance of the 1100 cm Desmosedici Stradale engine is kept in check by the use of MotoGP type aerodynamic winglets specifically designed for this model.

The prototype will race with a “pixelated” livery, designed by the Centro Stile Ducati and unlike normal practice with prototypes, the livery does not hide the lines of the motorcycle but reveals how the bike will look.

MotoGP type winglets are used to keep the front under control.

“The Streetfighter V4 will be one of the stars of the Ducati World Premiere 2020,” stated Claudio Domenicali, CEO of Ducati. “The Streetfighter V4 is the Panigale for road riding; so there was no better stage than the Broadmoor Pikes Peak International Hill Climb for what will be the highest performance Streetfighter ever put into production.”

The bike will be presented to the public at EICMA 2019 and will be available in Ducati dealerships starting from mid-March 2020 onwards.