In a recent interview with U.K. newspaper The Telegraph, the most successful design engineer in F1 history made quite a thought-provoking statement. Adrian Newey commented, “If you watch a sport – it doesn’t matter what sport – you want to come away with a feeling those guys are special. If you watch MotoGP, you think those guys are just superhuman. You just don’t get that with the current breed of F1 cars.”

Adrian Newey, the most successful design engineer in F1 history.

Newey who is unenamoured with the tightly controlled regulations currently in force in F1, believes they are so constrictive that, “the regulations design the cars.” Even as recently as two races ago in Germany the FIA outlawed FRICS, a front and rear interconnected hydraulic/mechanical suspension system which some teams had been using since 2010.

So disappointed is Newey with F1 he is stepping back from hands-on involvement at the end of the season with the Red Bull Racing F1 team. He has signed a new deal, where from next year he will be involved in Red Bull Technologies special projects, one of which is believed to be Britain’s America’s Cup challenger.

Newey, of course, has always had an uncanny ability to exploit the “grey” areas of the regulations on his way to designing F1 cars for the Red Bull team that have won four constructors and four drivers world championships between 2010-2113. 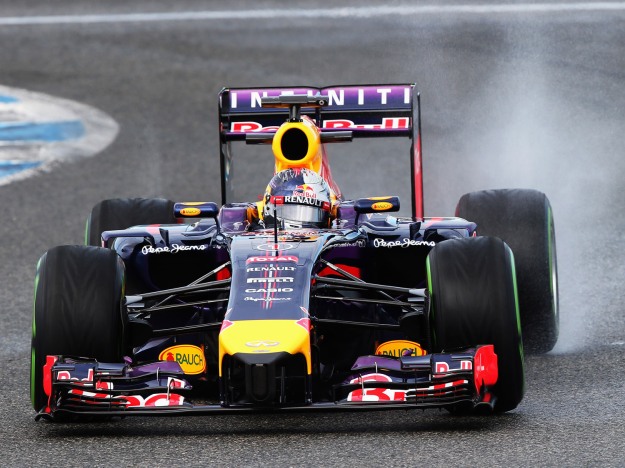 But as justified as the analogy between F1 and MotoGP is, the ongoing homogeny in technical terms for Grand Prix motorcycle racing is to a degree mimicking F1 and is of great concern for the “purity” of the sport. Let’s not forget that F1 supremo Bernie Ecclestone created Two Wheeled Promotions to form a joint venture with Dorna Sports in the early 1990’s to acquire the commercial rights to the motorcycle Grand Prix from the FIM. Ecclestone sold his companies interest to Dorna and its CEO Carmelo Ezpeleta has often looked to F1 for inspiration, “to improve the spectacle.”

We now have a situation in MotoGP where, just as in F1, there are colour coded control tyres, a freeze on engine development for the “factory” machines during the season and a limit on the number engines available. Which for 2014 can only consume a meagre 20 litres of fuel per Grand Prix. In 2016 it will also be mandatory for all the MotoGP teams to use a Dorna supplied ECU and software.

One significant difference, however, is the use of traction control in MotoGP. Banned initially in F1 in 1994 and backed up with the introduction of a standard FIA ECU in 2008, some MotoGP riders and a proportion of the fans are against these electronics as well, as it’s seen as an artificial enhancement of a rider’s ability. But it is also a concession by Dorna to maintain motorcycle manufacturer involvement, who have to justify the enormous expenditure required to go Grand Prix motorcycle racing and who have traditionally seen MotoGP as part of their research and development programs that filters new technology down to their road bikes.

The same is true of the new regulations in F1 with the return of a smaller capacity 1.6litre fuel-efficient turbocharged V6 engine that use a more complex hybrid energy recovery systems. Again, if the changes had not happened Renault and Mercedes may have withdrawn from F1, as they too have to justify the massive expenditure to go racing to their respective boards and shareholders by developing technology that is relevant to the road cars they build and sell. Nonetheless, the real racing person that Newey is, he describes F1 as becoming an “an engine formula.”

However, regardless of electronic rider aids and constrictive regulations, MotoGP racers by the very nature of motorcycle design are themselves “part of the machine”. Where they place their body weight under braking or going around a corner and accelerating out of a corner has a significant impact on lap times. Indeed MotoGP racers use everything available to them to go as fast as they can, carving angles of lean through bends that defy the laws of physics, and dragging not just their knees but also their elbows on the tarmac.

They also, thankfully, have no radio hookups with the pits and a team of technicians reading telemetry telling them what to do, only pit boards and their own judgment for tactical use of their fuel and tyre consumption over the course of a race.

Also, these racers are not strapped tightly into a safety cell with only a low percentile chance of serious injury should they crash, as is the case in F1. And regardless of the current technology MotoGP riders do crash regularly, and often spectacularly, suffering abrasions and broken bones. Ask Jorge Lorenzo, Dani Pedrosa and Cal Crutchlow to name a few. No matter what the technical regulators do to the sport of MotoGP, that innate, spectacular and highly dangerous involvement of the motorcycle racer themselves does indeed make them “superhuman.”

For a large number of MotoGP followers, and in particular fans of Casey Stoner, his new autobiography (with Matthew Roberts), “Casey Stoner Pushing The Limits” subtitled ‘The controversial and explosive autobiography of a two-time World Moto GP Champion” holds very few surprises. Many of the events in Stoner’s career and early life have already been well documented in the media.

But the book draws all the elements of Casey’s life together in a single volume that gives him the freedom to set the record straight after years muted media statements often due to the politics and pressure of the MotoGP paddock.  Stoner does not like being in the public spotlight and has found it difficult to fit the “Superstar” persona that the commercialised sports owners, Dorna, and the ensuing and often frenzied media pack try to demand.

Casey’s early life and his  love of motorcycles and racing is intriguing, and it’s clear that his upbringing played such an important part in shaping his career

However, the greatest revelation, I personally found, was his reasons for leaving Australia to compete overseas.  Although forced upon him, it was this decision that set Casey and his parents on the long and hard road to success.

“Casey Stoner Pushing The Limits” is well worth reading if you have little or no knowledge of this great Champions career. For those who follow the sport, or are a Stoner fan, it will clear the muddied waters of MotoGP politics, revealing how incredibly special the talent of Casey Stoner is.

Highly recommended.  Available from the Book Depository in hardback or paperback.